My life is complicated.  Whenever I add a new partner, I go over my web with them, so they know who I spend time with, who means a lot to me.  The first time, I drew it out on a napkin, the second time on a receipt.  Since then, I’ve gotten a little bit more high-tech and have a graphic to share*.

If you had asked me several months ago what my chart looks like, this is what I would have told you:  I am partnered with two people, Minx (female) and Trydaen (male).  Minx is recently married to Raven (male) and is partnered with Baron (male).  Though they are no longer dating me, Musician (male) and Butterfly (female) are still significant to me.  Butterfly is wife to Biker (male) and Willow (female) and dating Heinlein and Enoch (both male).  Musician is partnered to Shadow (female).  Willow is wife to Tech (male) and Biker is partnered to Sprite (female).  There are a few people I see occasionally, but don’t anticipate partnering with them, at least at this point in time.

My poly web, polycule, network, whatever you want to call it has recently gotten smaller with the passing of my partner Minx and the withdrawal of my former partner Musician.  I am still connected, at least by memory of Minx, to Raven and Baron. 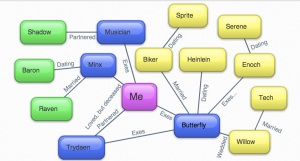 The gender quest of a nonbinary trans woman.

polyamory with a dash of muggle

Adventures of Wonder Woman and her two sidekicks

The Notes Which Do Not Fit

thoughts I do not want to keep in my head

Your Daily Polyamory Blog for Navigating Life, Relationships, and More

Spoonie on a Journey

Wielding the Stick of Grandmotherly Kindness

Love Letters to a Unicorn

Kink from a Subnmissive's Perspective

about everything that interests me all at once

The Curvy, Topsy Turvy, Bits of my Life.

"All that is gold does not glitter, Not all those who wander are lost; The old that is strong does not wither, Deep roots are not reached by the frost." -J.R.R. Tolkien

Conscious Polyamory: A blog about loving more than one
thelici
studentactivism.wordpress.com/
Poundcake